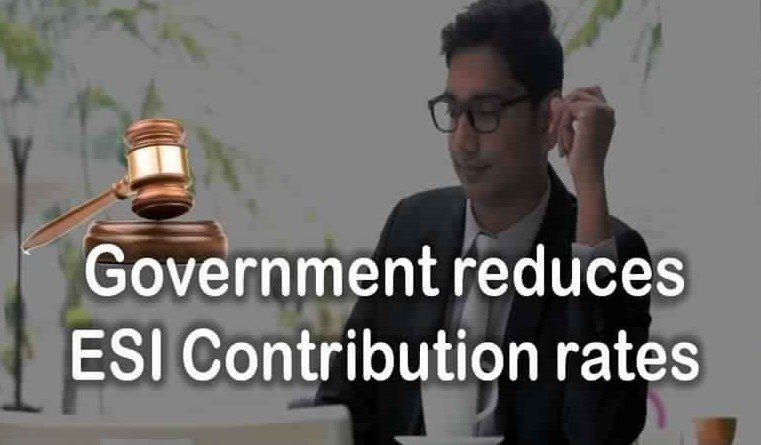 The GOI has finally taken action on its earlier proposal of lowering the ESI contributions percentage. In a press release issued by Ministry of Labour & Employment, the GOI has decided to reduce the rate of contribution under ESI Act from present rate of 6.5% to 4%, wherein employer’s contribution is reduced from 4.75% to 3.25% & employees contribution from 1.75% to 0.75%.

These reduced rates will be applicable with effect from 1st July, 2019. This decision would benefit the employers by reducing their financial liability & encourage them to enroll more & more employees under ESIC scheme. Similarly it will give some relief to employees as well by increasing their take home salary.

The reduced rate of contribution will bring about a substantial relief to workers and it will facilitate further enrollment of workers under the ESI scheme and bring more and more workforce into the formal sector. Similarly, reduction in the share of contribution of employers will reduce the financial liability of the establishments leading to improved viability of these establishments. This shall also lead to enhanced Ease of Doing Business. It is also expected that reduction in rate of ESI contribution shall lead to improved compliance of law.

The Employees’ State Insurance Act 1948 (the ESI Act) provides for medical, cash, maternity, disability and dependent benefits to the Insured Persons under the Act. The ESI Act is administered by Employees’ State Insurance Corporation (ESIC). Benefits provided under the ESI Act are funded by the contributions made by the employers and the employees. Under the ESI Act, employers and employees both contribute their shares respectively.

The Government of India through Ministry of Labour and Employment decides the rate of contribution under the ESI Act. Presently, the rate of contribution is fixed at 6.5% of the wages with employers’ share being 4.75% and employees’ share being 1.75%. This rate is in vogue since 01.01.1997. The Government of India in its pursuit of expanding the Social Security Coverage to more and more people started a programme of special registration of employers and employees from December, 2016 to June, 2017 and also decided to extend the coverage of the scheme to all the districts in the country in a phased manner. The wage ceiling of coverage was also enhanced from Rs. 15,000/- per month to Rs. 21,000/- from 01.01.2017. These efforts resulted insubstantial increase in the number of registered employees i.e. Insured Persons and employers and also a quantum jump in the revenue income of the ESIC.